The third session of the Halk Maslahaty Milli Gengesh
13 November

The third session of the Halk Maslakhaty Milli Gengesh of Turkmenistan of the first convocation was held yesterday, at which the laws adopted on October 30 during the fifteenth meeting of the Mejlis Milli Gengesh were considered. These regulatory documents have been developed in accordance with the priorities of the socially oriented policy of President Gurbanguly Berdimuhamedov and a comprehensive program to modernize the country's legislative and legal framework. "Turkmenportal" resource reports.

Representatives of the media were invited to participate in the meeting.

During the session, the Deputy Chairman of the Halk Maslakhaty Milli Gengesh, as well as the heads of the Committees, presented their opinions on each of the legislative acts.

As noted by the speakers, the main financial document provides for an increase in the revenue side of the State Budget, which will have a positive impact on the country's investment activity. Significant share of its funds is directed to the provision of public and social services.

According to the conclusion of the members of the Halk Maslakhaty, who unanimously approved the Law "On the State Budget of Turkmenistan for 2022" submitted for their consideration, this financial and legal document, prepared based on the economic strategy and taking into account the priority tasks outlined in the "Program of the President of Turkmenistan on socio-economic development of the country for 2019–2025”, is aimed primarily at maintaining sustainable economic growth, realizing the grand potential of Turkmenistan, ensuring high efficiency of government spending, and, in general, at steadily improving the well-being of the Turkmen people.

Further, the Law of Turkmenistan "On trust management of state property" was considered, which defines the goals, methods and procedure for transferring state property to trust management. The urgency of this document, which regulates the legal relationship arising between the owner of the property and the trustee in this process, was emphasized.

During the discussion of the new Law "On Postal Services", it was noted that this document, which establishes the legal, organizational, and economic foundations for activities in this area on the territory of Turkmenistan, is intended to contribute to its reform, the establishment of new standards for the provision of postal services, increased requirements for their quality and control of their observance.

At the session, the importance of the new edition of the Law "On the State Land Cadastre", prepared and adopted by the Mejlis Milli Gengesh, regulating the legal, economic and organizational foundations of activities in this area, was stated.

Further, members of the Halk Maslakhaty Milli Gengesh considered the Law "On the Legal Status of Foreign Citizens in Turkmenistan", developed in the context of the main priorities of state foreign policy.

During the session, the Law "On Accession to the Agreement on the Establishment of the Global Green Growth Institute" was approved. The agreement was adopted on June 20, 2012 in the city of Rio de Janeiro and defined the key goal of  creation of the Global Green Growth Institute ("GGGI") as contributing to the sustainable development of developing countries by supporting and spreading a new economic paradigm in which green growth is seen as balanced progress in economic development and environmental sustainability.

During the session, other topical issues were also considered.

The laws submitted to the third session of Halk Maslakhaty Milli Gengesh of the first convocation received unanimous approval, and the corresponding Resolutions were adopted accordingly. 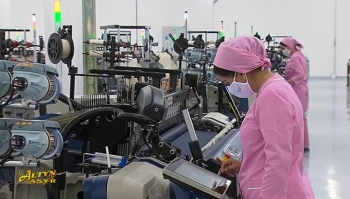 The President of Turkmenistan opened a large textile complex in...

The results of the growth rate of institutions of the...
Top read
The President of Turkmenistan took part in a meeting of...
Ashgabat buses will change schedule on New Year's Eve
The main New Year tree of Turkmenistan became the highest...